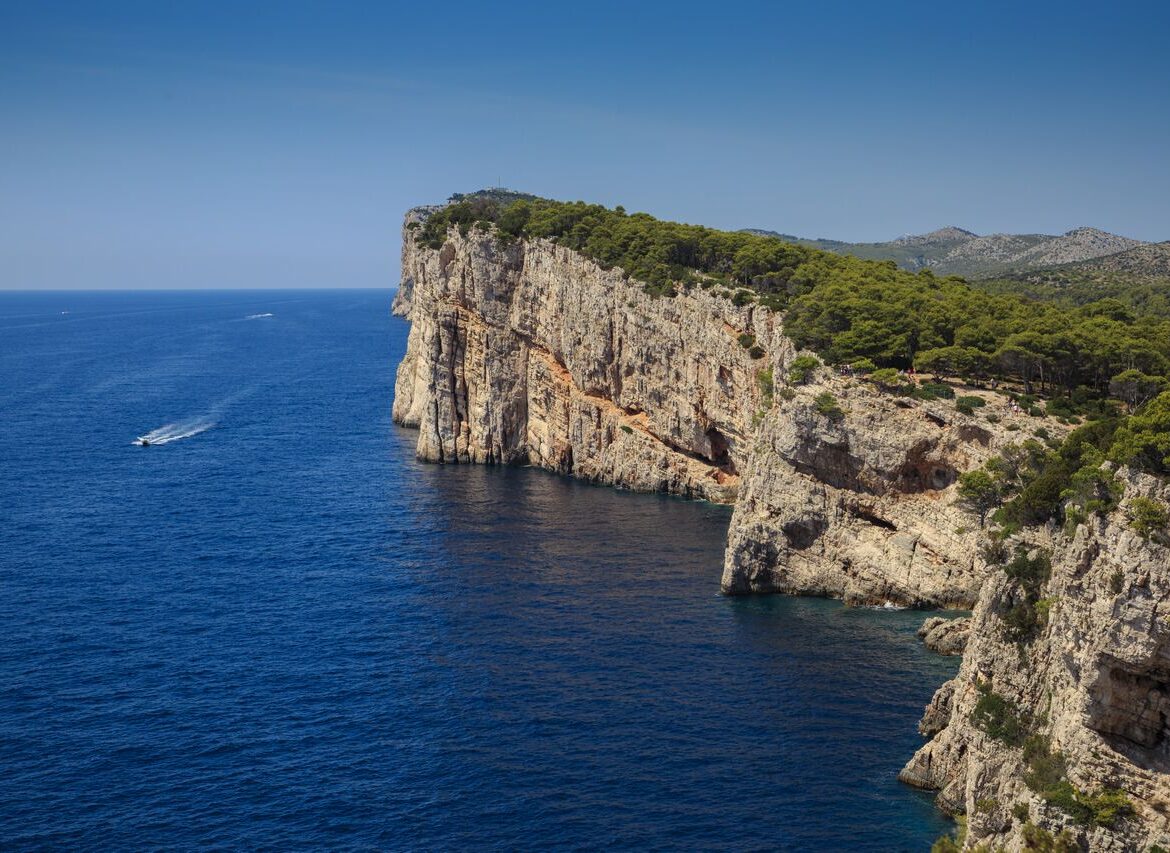 Croatia has a total of eight national parks, three of which are located on islands, whose unspoilt nature makes for a perfect sailing destination to explore. There is National Park Brijuni, located off the coast of the Istrian peninsula in the north of Croatia, the Kornati Archipelago, an ideal sailing destination which consists of 140 islands and islets, and National Park Mljet, situated in the immediate vicinity of Korčula island and Pelješac peninsula.  here are also two national parks located on the coast: Krka waterfalls near Skradin, and Paklenica in Starigrad.

The Kornati Archipelago consists of 140 islands and islets, which geographically can be divided into two main groups: Gornji Kornati (Upper Kornati) and Donji Kornati (Lower Kornati). Gornji Kornati are closer to the mainland and consist of Žut Island, Sit Island and the surrounding islets, whereas Donji Kornati (Lower Kornati) mostly face the open sea in the SW and consist of the island of Kornat, Piškera and many more islands and islets. The islands of Donji Kornati belong to the National park Kornati. The Kornati Archipelago is situated around 7 nautical miles from Murter island, where the office of the national park is located, and around 15 nm from Šibenik and Zadar. The islands are mostly uninhabited. 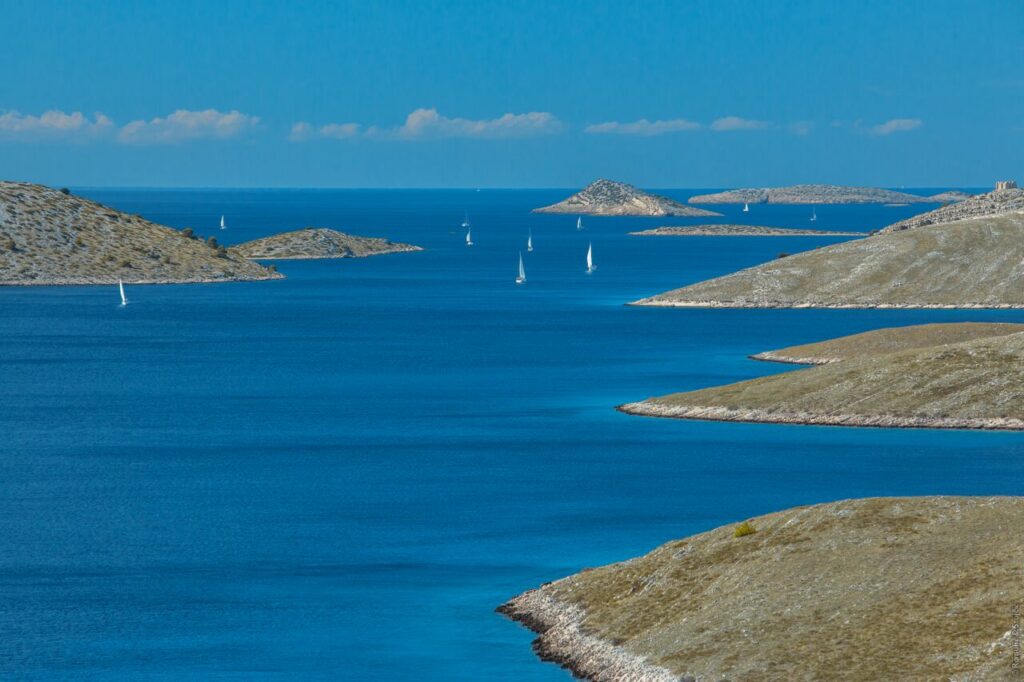 You can visit the Kornati islands by chartering a boat, taking one of many organized boat tours or by your own boat if you have one. Organized boat tours often include one day trip around Kornati islands, lunch on a boat or at a restaurant, a visit to one or two beaches where you can go swimming, and some tours even include a stopover at the beautiful Telašćica nature park on Dugi Otok island. For more details about the travel agencies which offer boat tours to the Kornati, you can contact the National Park’s office on Murter. Contact information provided at the end of the article.

If you decide on booking the boat tour, make sure you do so a few days in advance as it can get pretty crowded, especially during the high season (July and August). You can book a tour on a smaller boat for up to 10-15 people (these get booked faster) or a bigger boat for up to 200 people. During the months of July and August, the boats sail every day. The price, route, departure and return time are determined by the tour organisers. Most of them set sail for the islands around 9 A.M. and return sometime in the afternoon, around 6 P.M. Also, note that the boat ride from Zadar or Šibenik takes approximately 3-4 hours to reach Kornati National Park, so be patient and enjoy the stunning views of Zadar and nearby islands of Ugljan and Dugi Otok. There are no ferries to the Kornati archipelago as they are mostly uninhabited, just a few houses, restaurants and marinas. The nearest inhabited islands are Dugi Otok and Pašman.

If you decide to take your own or charter a boat, be careful when sailing close to the islands as there are many reefs and shoals.

The Kornati islands are often described as the nautical paradise, where a sailor can test out his navigation abilities and sailing skills as well as enjoy the stunning scenery. Visitors can also take a swim in the crystal clear sea, dive in and discover the rich underwater fauna and flora or take a hike to the numerous viewpoints and lookouts. The hikes are not particularly difficult, but protect yourself from the sun as it can get very strong in the summertime and there is barely any shade on the island. There are no restrictions on walking ashore but bear in mind that most of the land is private property.

When sailing through the Kornati, don’t miss out on another precious gem of the Adriatic Sea – Telašćica Nature Park. The park is located north of Kornati, in the south-eastern part of Dugi Otok. Moor or anchor your boat in Telašćica Bay, one of the safest and most beautiful bays in the Adriatic, surrounded by numerous small islets and beaches, climb up and enjoy a stunning view of 160 metre-high cliffs (‘stijene’) or take a swim in the salt lake called ‘Mir’ (Peace), which is known for its medicinal properties. 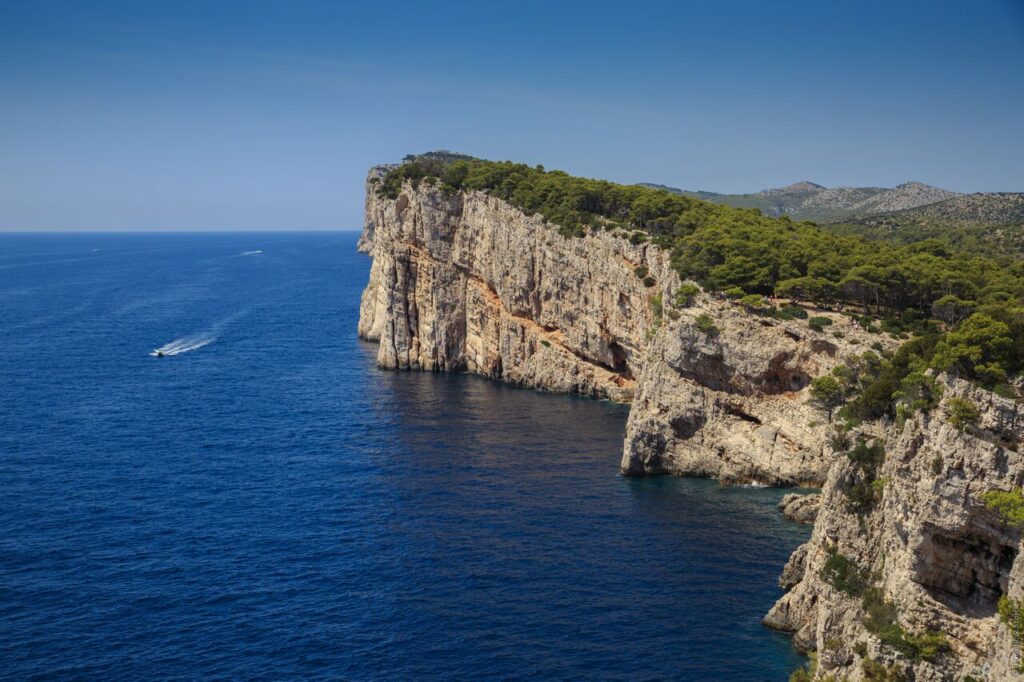